During his reign atop the obsessions of CrossFitters in the pre-open era things were simplistically intense. One workout a day, everything you’ve got, spend the next 24 hours getting over it, rinse and repeat. Pukie was never exclusively tied to emptying the contents of your stomach into the nearest chalk bucket, but also to the question of “how hard can you really push yourself today?” Will you get every ounce of improvement out of this single training piece as possible? Are you willing to crash and burn round one, or to shred your hands and keep going? If you can get past your own issues with the CrossFit hipsters at your box, ask them what it used to be like. You will be able to feel how special it was in their response. So, what changed? Are we able to find any common ground between the pre-open era and what has become our latest obsession?

So many of us only took the advice we were given by Coach Glassman that we wanted to hear. The pain,

competition, and camaraderie were all we needed to do our part in building this worldwide family. Then there were those that listened to the foundational prescription of mastering movement and showed up to the party with a set of skills that positioned them miles ahead of the competition. Everyone watched in amazement as these athletes continually pulled away during workouts at the CrossFit Games, regardless of the elements in the test. This new level of competition led to a re-evaluation of priorities for athletes and coaches. You no longer stood a chance in the sport if you couldn’t figure out how to master the efficiency of most movements. Whether the transition took longer than I remember, I honestly cannot say, but with this shift in thinking our new obsession was born. The conversation seemed to instantly change from how hard can I make this workout, to how easy can I make it.

Why do you need him?

The mountains of anecdotal evidence relating to the psychological changes that occurred in the ‘Pukie Era’ are staggering. That level of physical exertion within a steady diet of couplets and triplets five to six days a week yielded the results that built the foundation of CrossFit. 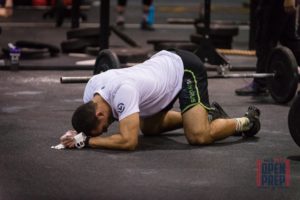 The second part of the story wouldn’t exist without the efficacy of the first. Deep down we all know the idea behind this boogie man will whip you into shape, but it’s also a remarkable teacher of how to break the limits your mind sets for you. Every time you are willing to take that extra step into the fire, closer to facing Pukie, you realize that there are still more barriers to break past. While that can be scary, it’s also encouraging to realize what you’re truly capable of. It’s also imperative to realize that successful athletes who appear to keep their cool amidst the most excruciating points in a workout are also suffering; they just don’t make it worse by giving into it.

How do you get him back?

One constant in the evolution of CrossFit has been the tracking of absolute results. Weights, times, and reps have been scattered all over whiteboards, websites, journals, and note apps for 15 years. For you to help revive Pukie you need to constantly be aware of the immeasurables. How did it feel to hold 1,600 calories per hour prior to that set of power snatch? Could you catch your breath in the kettle bell swings after a 1:20 400m run? These are examples of the information buried in you

r training every day. I guarantee a lot of you think you know the answers to these questions, but unless you’ve failed miserably over and over because you went too hard, you have absolutely have no idea. The path back to the level of intensity that yields immediate results will be infuriating to the athlete who has spent countless hours fussing over their technique and very few laying on the ground in so much pain wondering if they will ever feel normal again. Think about how challenging it would have been for an athlete who could consistently amass 400 reps of Fight Gone Bad in 2008 to attack the final workout of the 2015 CrossFit Games Regionals. The 15 muscle-ups to begin were unbroken for almost every athlete. The fittest men and women on earth would have lost to hundreds of regionals athletes in this workout. As you can imagine the transition period was challenging for a lot of athletes. This level of commitment is the same thing we’re asking for in the exact opposite direction. But this time we’re going to move on to the third chapter of CrossFit obsessions: blurring the lines between chapters one and two.

We’ve acknowledged both the power of Pukie and the downfalls associated with a narrow focus. We’ve also acknowledged how the world of movement efficiency can both catapult athletes to the top of their game and pull others into the trap of slowing down too often. These polar opposites represent a form of ‘black and white thinking’. One is over here, one is over there, make your choice. What we need to realize is that these two obsessions are not mutually exclusive. The grey area in the middle represents the version of yourself you’re striving to be, regardless of which side you currently live in. Some of you still may need to flip this article upside down and upgrade your toolbox, but for most of you it’s time to meet Pukie.

To everyone who has added themselves to the hashtag #MisfitTakeover in their Crossfit Games profile; THANK YOU! Here are the leaderboards so you can see…

Last month Coach Hunter dropped a very insightful article dubbed “The Misfit Stimulus Package.” The objective of that article was to educate you Misfits on…

Two massively essential principles within the Misfit Athletics walls are ‘What gets measured gets managed’ and ‘Grow or die.’ Underneath both maxims lives an…